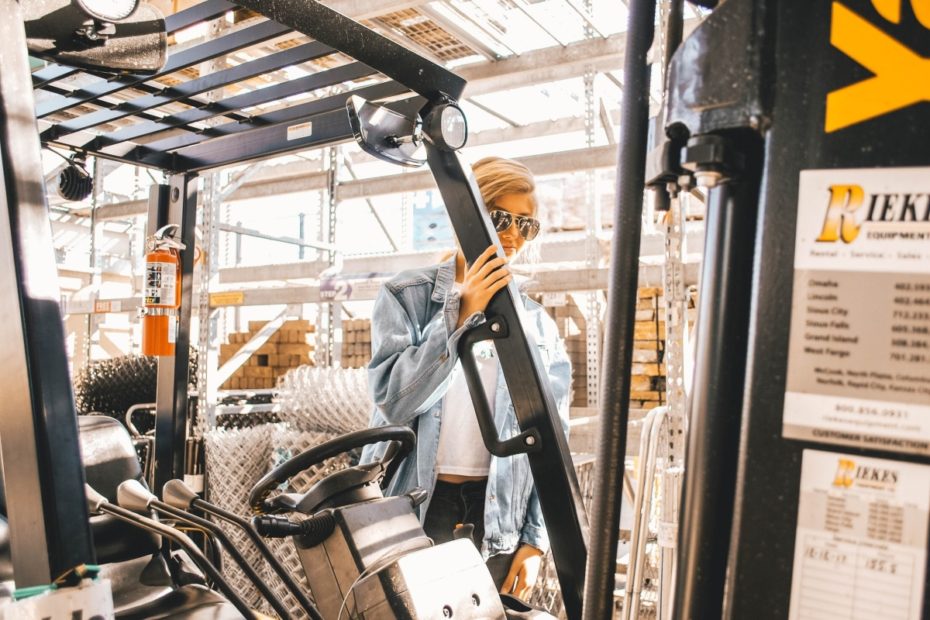 Forklifts. There’s nothing special or interesting about them, right? All they do is help us move things from one place to another.

Surely there are no links between forklifts and the Second World War, or a low rate of accidents, or cowboy-related sports?

If you think this, you need to read some forklift facts, because you are wrong!

But look how lucky you are! As we here at Flexistaff have constructed a list of 5 fascinating forklift facts just for you. So, sit back, relax, and enjoy!

Our first fact takes us back almost 100 years.

Although palletised handling started as early as the 1920s, businesses weren’t using them as much as today. So, what changed this? Surprisingly enough, it was the Second World War.

During the war, certain goods became largely sought after. Naturally, these goods then became produced in much larger quantities. These goods needed moving from production lines to distribution, etc. But the large quantities of goods combined with the lack of labourers to move them became problematic. Enter the forklift.

Businesses began to require forklifts more and more as the demand became higher. It’s reported that one business went from around 500 forklifts in 1939 to over 23,000 by the end of the war. An increase of 459%.

However, not only were businesses using forklifts. The US military themselves also contributed to the demand for forklifts. With the American War Production Board granting large funds for the purchase of forklifts to the US Military during the 1940s.

Our second fact of the list tackles the idea that forklifts are dangerous and cause lots of accidents.

Considering forklifts are known and used for carrying large goods around, the accident rate involving forklifts is lower than you think. According to reports, forklifts are only actually responsible for around 1% of accidents in business factories and warehouses.

But why is this?

People sometimes have a perception that warehouses that use forklifts are chaos. With products and forklifts dashing around in every direction like wacky races. But, sadly, this isn’t the case.

Most warehouses or factories have a strictly enforced speed limited of around 8 miles per hour. This is often lowered to 3 miles per hour in areas with pedestrians. This combined with extensive forklift training for operators lowers the risk of forklift-related accidents. Keeping the rate at around 1%.

This fact takes us to all corners of the Earth. And, sadly, some people have been known to use their forklifts for evil.

On more than one occasion, thieves have harnessed the honest skills of a forklift and used them to steal ATM machines. In the last two years, there have been several cases of this scenario, most of which have ended badly.

In 2017 a case was reported in Arkansas, USA, in which a huge forklift was used in a smash-and-grab attempt involving an ATM. There have been 2 attempted cases in Scotland, one in 2018 and one in 2019 (the latter of which was unsuccessful). More locally and more recently, in 2019 in Peterborough, a forklift was used in the theft of an ATM.

But, it’s not all doom and gloom, as this fact has a happy ending.

In 2017 in the Czech Republic, warehouse workers blocked off fleeing thieves as they tried to escape from the business. What did the workers use? You guessed it – forklifts!

Not all heroes wear capes, but some do drive forklifts.

From internal combustion and electric-powered, there are forklifts available now to service all your warehouse or factory needs.

The internal combustion-powered forklifts rely mainly on diesel, gasoline, propane, or liquefied petroleum gas. These are used for mainly outdoor areas due to the fumes and waste they produce.

However, electric-powered and hand-powered forklifts are becoming more common among businesses. Especially in warehouses and factories. This is, of course, because they produce fewer fumes and waste than internal combustion-powered forklifts. The initial battery-powered forklifts had extremely short battery lives, maxing out at around 8 hours before needing recharging. Since then, batteries have been improved drastically, meaning that these forklifts now last much longer.

To read more about the different types of forklifts and which one you should use for your business, click here .

This is a fact, we promise you. If you don’t believe us, look it up.

Anyway, you know rodeos, right? The sport where people ride broncos, wrestle steers, and roping calves? Imagine that, but with forklifts. And yes, we’re being serious.

Don’t worry though. No animals are used in this pastime though.

However, the principles remain the same. Showing off your skills and tricks on a forklift is the name of the game. Obstacle & driving courses, bowling, and basketball are all events that can often be found at forklift rodeos. No, we’re not joking.

There you have it, 5 fascinating forklift facts. We hope that you’ve learned something by reading these. Be sure to let us know your favourite fact in the comments section.

Interested in attending your local forklift rodeo? You’re going to need some top-quality training. Click here to get in contact and discuss all of your forklift training needs.